Many passive scientific instruments at the site operate continuously to monitor the natural geomagnetic environment. In collaboration with our international and national researcher partners, we’ve made real time data collected at the site available here.

The HAARP site is an ideal location for deploying synergistic instrumentation for studying radio and space physics. Investigators interested in deploying diagnostic apparatus including radio receivers and radar, lidar, optical imagers and spectrometers, and interferometers are encouraged to contact the HAARP Ionospheric and Radio Science Laboratory at UAF-GI-HAARP@alaska.edu or 907-474-1100.

Riometers, or relative ionospheric opacity meters, are used for measuring radio absorption in the ionosphere. The original riometer instrument was developed at the Geophysical Institute at UAF during the 1950s. A riometer consists of a radio receiver and a directional antenna pointed directly upward. The Nagoya University (Japan) riometer at HAARP uses a broad-beam riometer made by La Jolla Sciences with an operating frequency of 30 MHz and a frequency bandwidth of 250 kHz. The riometer has a dual half-wave dipole antenna with a separation of 14 feet at more than 60 inches above the ground. Two reflectors are located 30 inches below the antennas. The antenna receives signals from radio stars throughout the galaxy; these signals are called galactic noise. When the ionosphere is relatively “clear”—that is, free from plasma density in its lower portions—the riometer picks up galactic noise to its full capacity. However, when the ionospheric plasma density is enhanced by high-energy electrons from the magnetosphere, the galactic noise becomes weaker. Scientists can then compare the relative strength of galactic noise received by the riometer to determine the level of ionospheric absorption at any given time. This data allows researchers to monitor auroral activity and other forms of ionosphere radio absorption.

The ionosonde is an HF radar used to measure ionosphere conditions overhead. While most radars transmit at only one or two frequencies, the ionosonde transmits many different frequencies, typically ranging from about 1 to 20 MHz. The pulses or pings transmitted at each frequency reflect off of different ionospheric layers or altitudes, because the reflection point of each frequency depends on the density of the ionospheric plasma, which changes with altitude. This allows the ionosonde to measure how the plasma density varies at different heights overhead. This information is important at HAARP because the IRI transmits in the same frequency range, and the altitude where the IRI modifies the ionosphere depends on the plasma density altitude profile. The ionosonde is able to “see” a much larger fraction of the sky than the IRI typically modifies, so the ionosonde is mainly used at HAARP to determine the background ionosphere conditions before and during experiments. However, during certain conditions and experiments, the effects of the IRI are also apparent in the ionosonde data.

Seismic station HARP (spelled with one “A”) is one of over 400 currently operating across the state of Alaska. This instrument is one of many passive diagnostic instruments at the research station that are not connected to IRI operations. The instrument is designed to measure vibrations within the Earth. This seismic station was upgraded with state-of-the-art instrumentation in 2015 as part of the National Science Foundation’s EarthScope Transportable Array network. This sensor is sensitive enough to record an earthquake magnitude 5 or greater anywhere on Earth. The seismometer is buried 15 feet below the surface in a borehole beneath the yellow drum. The tan canister connected to the drum houses the communications equipment, data logger and power supply. Data is constantly recording and is transmitted in real time to the Alaska Earthquake Center at the University of Alaska Fairbanks and to the EarthScope Array Network Facility at the University of California, San Diego. To learn more about earthquakes in Alaska visit earthquake.alaska.edu.

View images and video from the Wrangell webcam

Radio JOVE is a NASA citizen science education project that is designed to observe radio signals from the Sun, Jupiter, the Milky Way galaxy, and various terrestrial radio sources. The system is designed to be simple to set up and use, and is popular with high school and college students as well as the amateur radio community. The primary goals of the program are to inform the public about radio astronomy, provide resources and support for teachers and students, and promote public sharing of the scientific data collected.

e-CALLISTO is a solar radio spectrometer network with locations around the world. The network is designed to provide a simple, low-cost way to study the radio spectrum produced by the Sun, as well as to promote citizen science and general interest in radio astronomy.

The HAARP installation consists of a crossed-dipole HF/VHF antenna operating in the 10 MHz-90 MHz range, and is used for studying solar radio emissions, meteor trail reflections, aurora radio reflections and the cosmic radio background. This installation typically captures a very large number of solar radio bursts during the Northern Hemisphere summer months (May-September), due to the extra daylight at these latitudes in the summer. A graph showing the number of solar radio bursts captured by all e-CALLISTO stations during September 2022 is shown below. 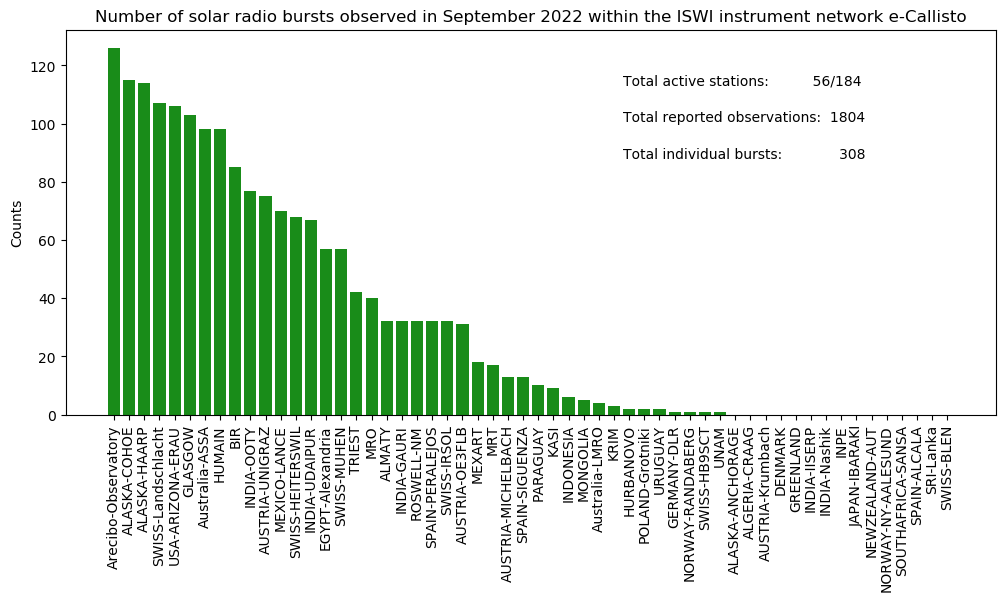 The Raspberry Shake project is a citizen science program designed to deploy low-cost seismometers and infrasound detectors at locations across the world. This network can give scientists a wide range of data on earthquakes, volcanic eruptions, landslides, ocean waves, and other natural or man-made sources of seismic activity or infrasound.

Infrasound is a term used to describe very low-frequency sounds (below 20 Hz) that are below the range of human hearing. Due to their low frequency, infrasound is capable of traveling extremely long distances, in some cases thousands or tens of thousands of miles. The installation at HAARP is capable of recording infrasound produced by volcanic eruptions, ocean waves, meteors, and a variety of other sources. Live data from the Raspberry Shake BOOM at HAARP is displayed below.